Locally Owned Classic '72 Bronco! This One Is A Beauty!!!
Sold
SOLD
Show All Photos

Here’s your chance to own one of the best looking Classic Bronco’s on the West Coast! Beautiful 1972 Ford Bronco with built 302CI V8 and C4 automatic transmission. Wild horse twin sticks to Dana 20 transfer case with Dana 44 front axles. This Bronco has resided in California most of its life.  Runs and drives perfectly and has been on numerous road trips to Bishop, CA from SLO with zero issues. You can’t go wrong with an early Ford Bronco- especially one that looks this nice. These Bronco’s are going up in value so don’t miss out- call us today! A great investment that will only appreciate with time. *CALIFORNIA CLEAN TITLE ’72 BRONCO* 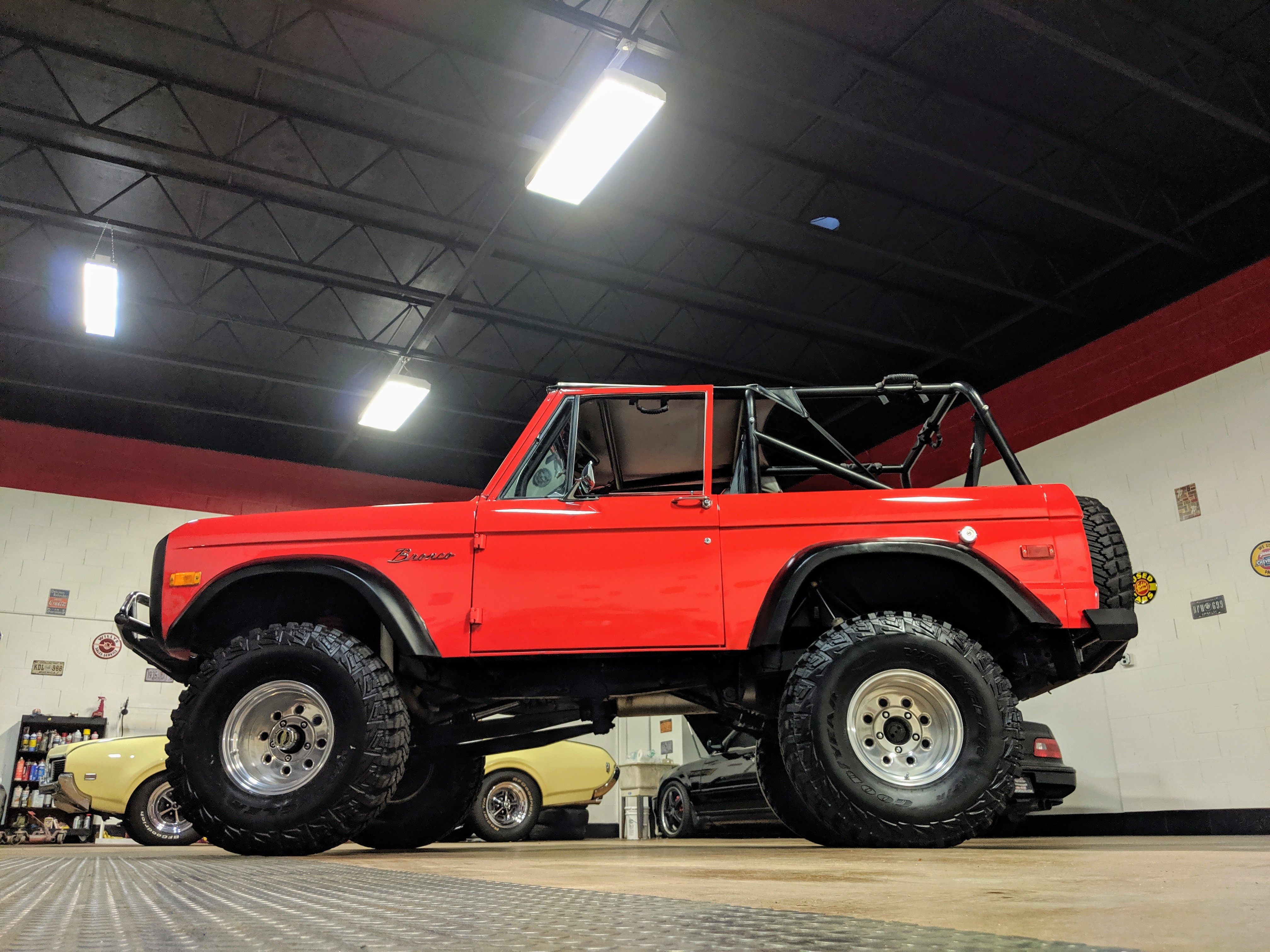 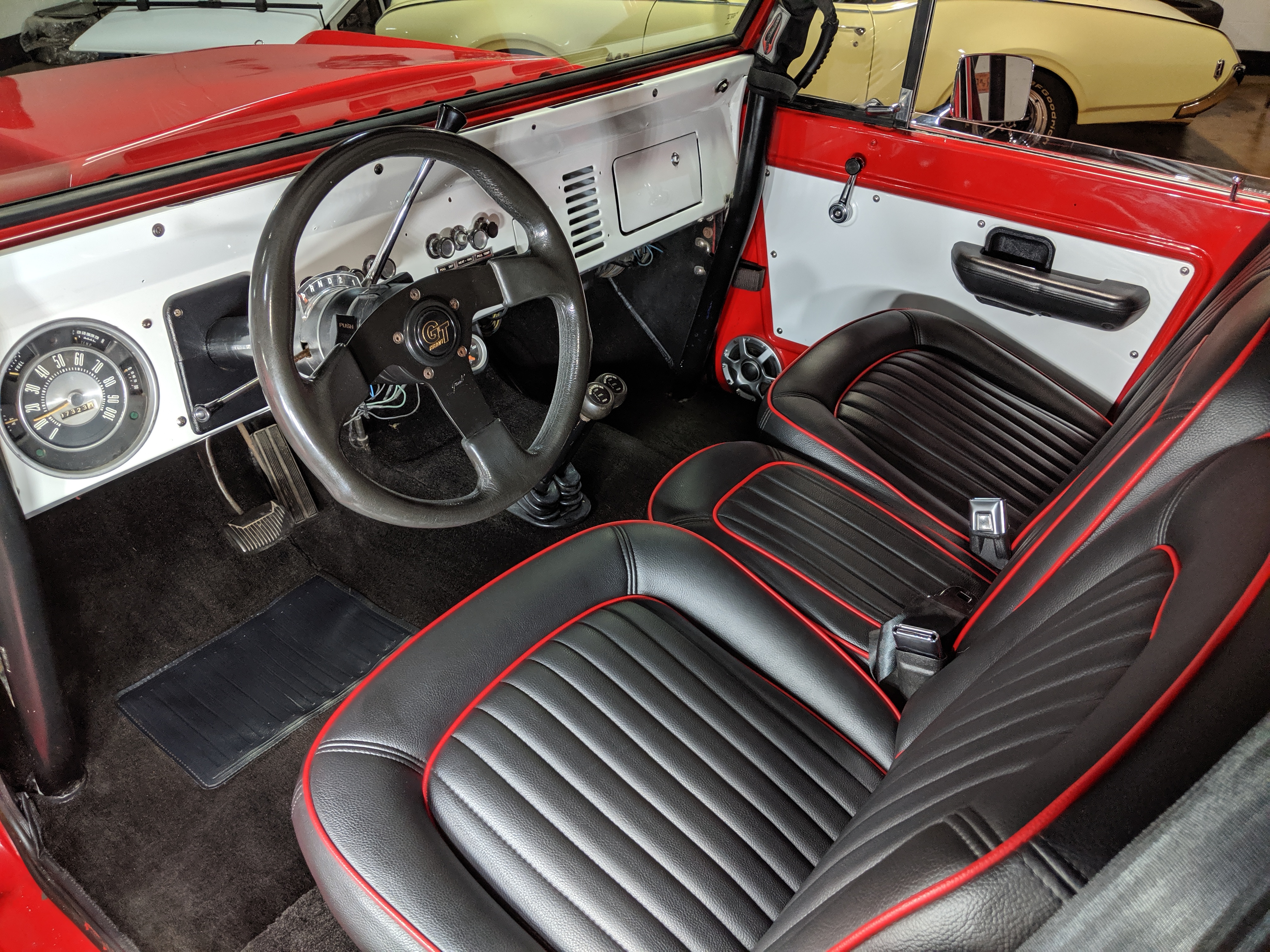 Transport and financing available. We ship our Classic’s all over the country so if you need a quote contact us and we’ll get it for you right away. If you need help getting financed we can also help you with that.  One, if not only red 1972 Ford Bronco for sale in California. This one is a beauty and it shows. Be sure to check out our photo gallery as we have 150 plus photos along with our Youtube video showing the undercarriage and complete walk around. 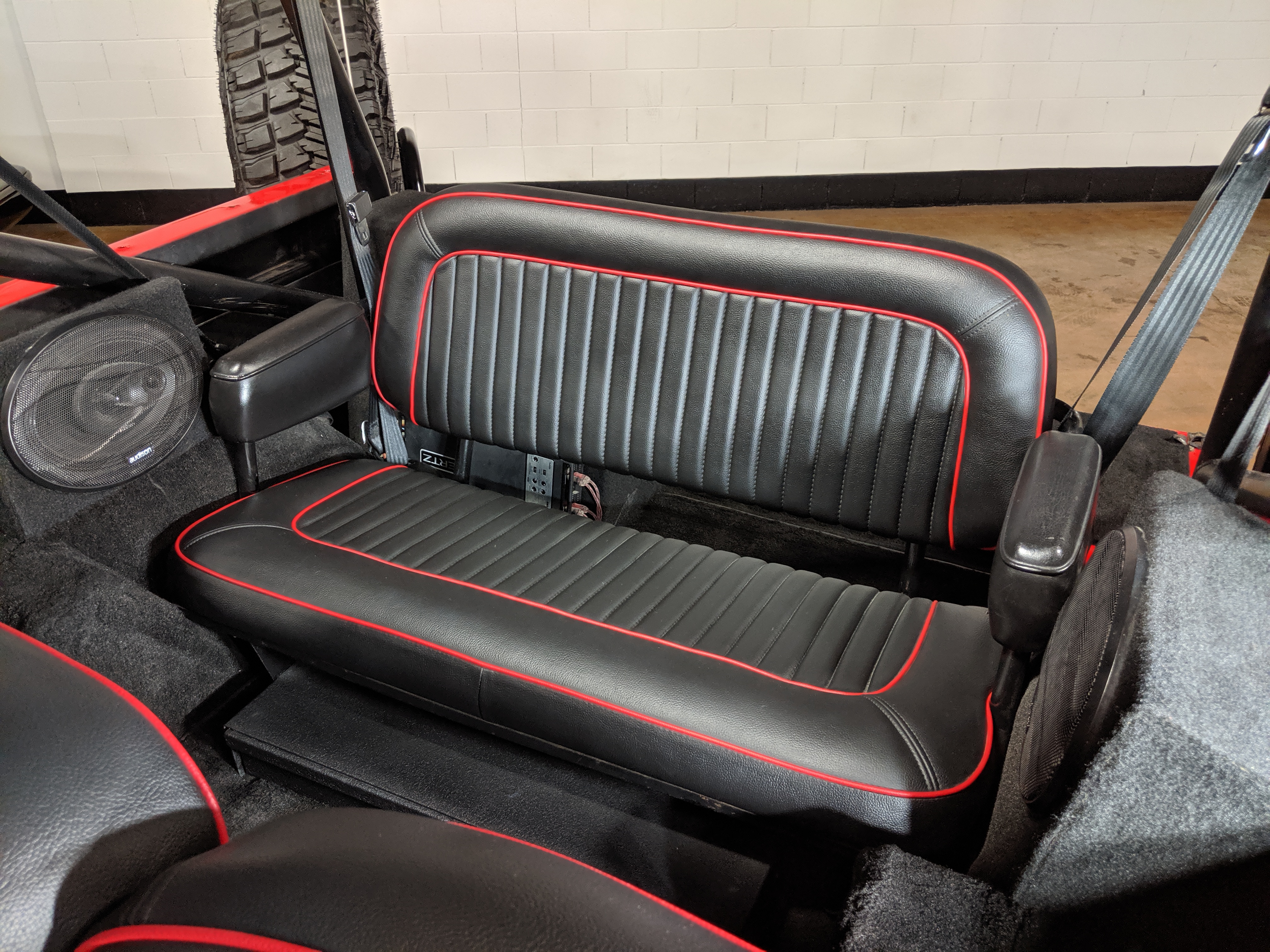 Runs and drives perfectly. Fires right up each time and has a nice idle and tone from the exhaust. Alignment is perfectly straight and vehicle doesn’t sway from side to side when driving down the road. Has good acceleration and power from the Edelbrock aluminum heads and brakes nicely with the power front disc brakes up front. Overall a great vehicle at a great price. The perfect California Classic Ford Bronco.  It doesn’t get much better than this! 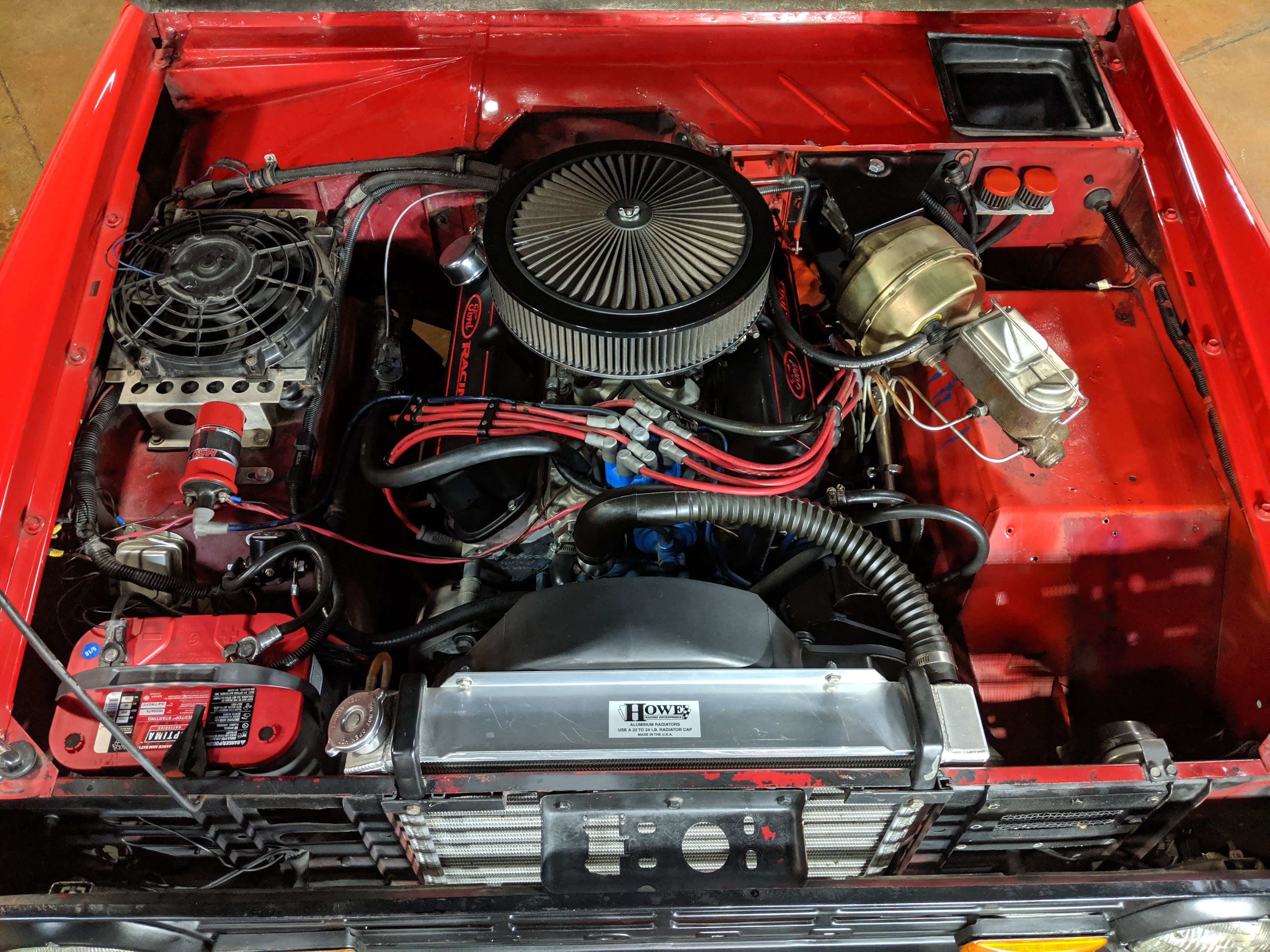 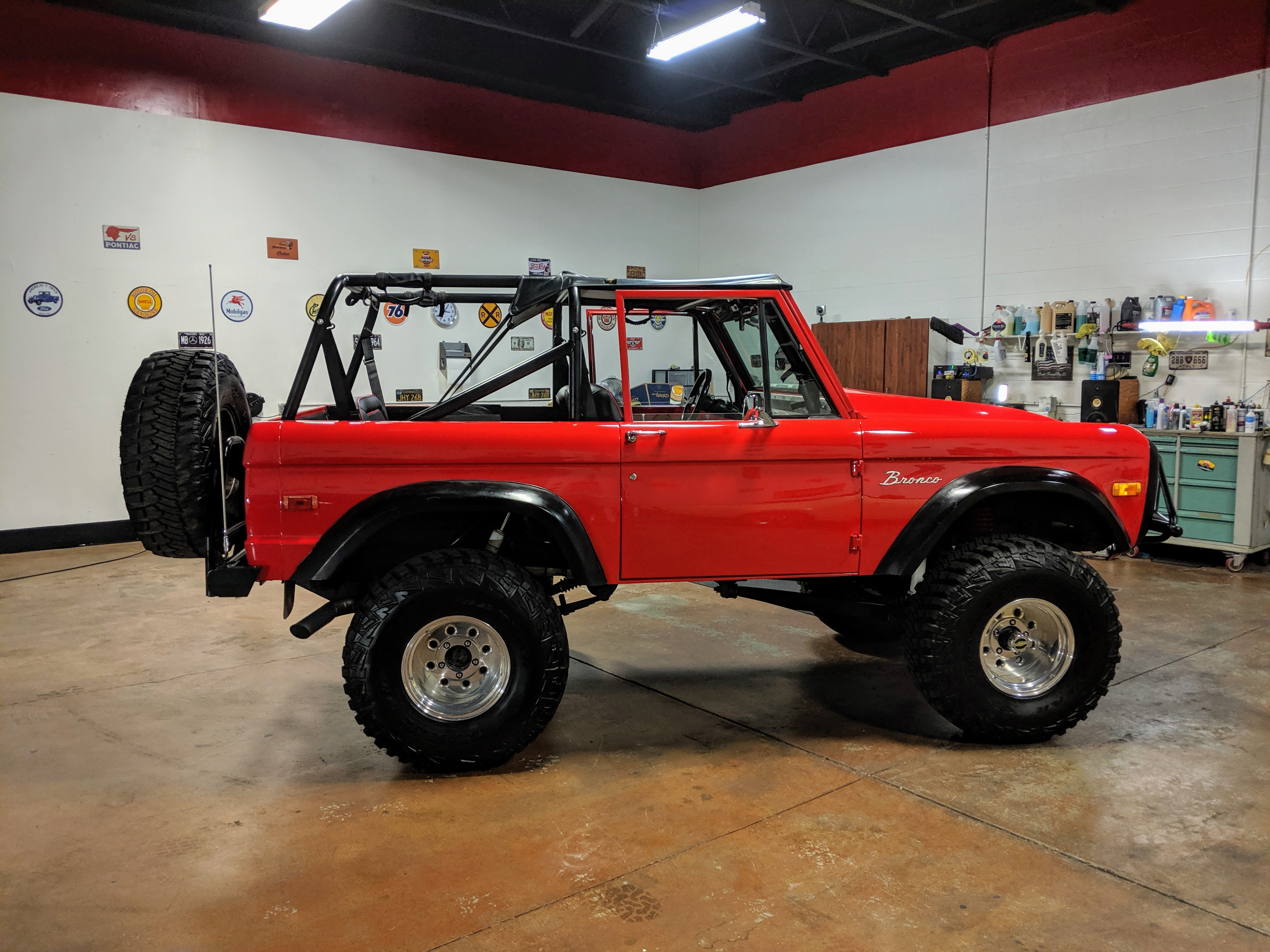 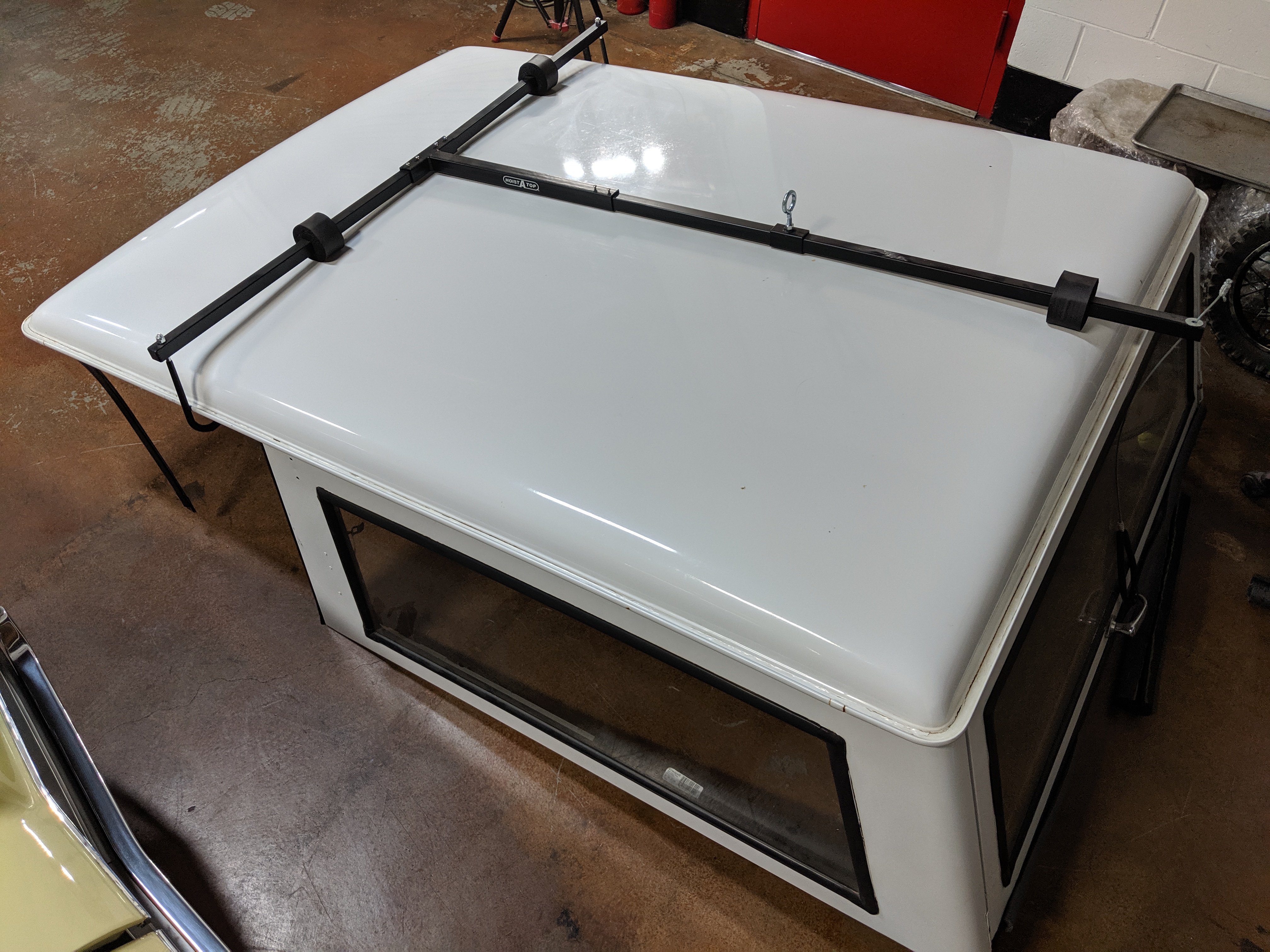 The Ford Bronco was introduced to the public in August of 1965 to compete against Jeep’s CJ-5 and International Harvester’s Scout in the burgeoning recreational four wheel drive vehicle market. The first Broncos were very spartan without options such as power steering and an automatic transmission. The first models were available only with a 105 hp 170 cid six cylinder derived from Ford’s Falcon lineup. The only available transmission was Ford’s 3.03 three speed manual with a column mounted shifter. Transmission ratios behind the six cylinder were: 3.41:1 first, 1.86:1 second, and 1:1 third. When the 289 V8 option was introduced in March 1966, the three speed manual behind it had ratios of: 2.99:1 first, 1.46 second, and 1:1 third. The transfer case was a Bronco specific Dana 20 with a low range ratio of 2.46:1. Unique to the models was a tall shifter with a shift pattern matching that of the T-handle shifter, but with a J- handle style ball mounted on top. Most ’66s also had rear shock absorbers that angled forward in front of the axle with stud mounts at the top instead of the later rear-canted eye mount shocks. The Bronco, with a 92 inch wheelbase was offered in wagon, half cab, and roadster configurations. The roadster option was not very popular and was discontinued after 1968. Standard brakes were 11 x 2″ front drums and 10 x 2.5″ drums on the rear on the small bearing (2780 lb.) axle and 11 x 1.75″ drums on the large bearing(3300 lb.) axle. All Broncos employed a Ford 9″ rear axle and until 1971, a Dana 30 front axle rated at 2,500 lb. Axle ratios were 3.50:1, 4.11:1 and 4.57:1(6 cyl. only). The standard gas tank held 14.5 gallon with an optional 11.5 gallon second tank available. Options for ’66(including dealer installed accessories) included: Warn free wheeling hubs, snow plow kits, winches, tachometers, Air Lift front auxiliary springs, trailer hitches, tow hooks, etc. Most of the options and many others were included through the Bronco’s twelve year run. Production for the 1966 year totaled 18,200 units.

Bumpers with curved ends and side marker reflectors immediately distinguished the 1968 models from their predecessors. Locking front hubs, new inside door handles and “soft” window crank knobs were other new options. This was also the last year for the 289 V8 and the roadster option. 1968 production was 15,700 trucks.

1969 was a big year for the Bronco with production jumping to 19,200 units. The 302 V8 replaced the 289 V8. Two speed electric windshield wipers replaced the vacuum units several months into the production run. Amber lenses parking lights replaced the previously used white lens. The Sport models now had aluminum door panel trim, pleated parchment interior, and a rear floor mat when the rear seat was ordered. Some sources say the removable top feature was discontinued, although we enthusiasts know better! The steering stabilizer became a standard feature along with improvements in NVH.

Repositioned side marker lights and reflectors were the most obvious change to the 1970 Broncos. The Sport Bronco became a model rather than an option package. 1970 also saw the first application of evaporative emissions recovery systems with gas tanks on models so equipped losing capacity to 12.7 gallons and 10.3 gallons in the main and auxiliary tanks respectively. 18,500 Broncos were built in 1970.

When the Bronco was introduced in the mid-sixties, its main competition was the Scout 800 and the Jeep CJ-5, both spartan vehicles to say the least. By the early seventies, with the introduction of the Chevrolet Blazer and the Scout II, it became painfully obvious that the Bronco was beginning to fall behind the competition. In 1973, Ford finally answered the calls for modernization by introducing the C-4 automatic transmission option and optional power steering. The C-4 had ratios of 2.46:1 low, 1.46 second, and 1:1 third. The power steering box was a Saginaw unit with 5.3 turns lock-to-lock. The base engine was bumped from 170 to 200 cubic inches. The J-handle transfer case shifter was introduced shortly after the model year began and the low range transfer case ratio became 2.34:1. These changes helped push early Bronco sales to their second best year ever: 26,300.

By 1974, the 200 c.i.d. six cylinder and 4.11 axles were no longer available in California. A new emissions package was also introduced for California Broncos. Some subtle changes were made mid-year to the J-handle shifter mechanism in response to complaints of tough shifting. The transmission selector was lighted starting in ’74. 21,400 Broncos rolled off the assembly line in 1974.

Unleaded fuel engines and catalytic converters were the new items added to the Bronco in 1975 in the face of increasingly strict emissions requirements. Some sources also say that the cam timing on ’75 engines was retarded to help with emissions as well. Sport and Ranger models received the F-Series steering wheel for the year. GVWs and ride heights were revised. Among the new options was an 800 watt engine block heater for folks in cold climates. Bronco production shrunk to its lowest ever in 1975 with just 13,200 trucks produced.

The bicentennial year brought several key improvements to Ford’s sport utility, most notably the addition of long overdue power assisted front disc brakes. The rear brakes were upgraded to 11 x 2.25″ drums. The steering box ratio was shortened to 3.8 turns lock-to-lock. The dreaded Y steering linkage was also introduced in 1976 along with a front anti-sway bar. A Special Decor Group comprised of a flat black-finished grille, tape stripe, bright windshield molding, and side window frames and wheel covers was introduced mid-year. 14,500 Broncos rolled off the line in 1976.

Everyone knew the early Bronco’s days were numbered in the face of stiff competition from the Blazer and Chrysler Corporation’s Ramcharger and Trail Duster trucks. The 1977 Bronco in many ways represented the best of the breed. There were very few changes from the previous year; the most important one for enthusiasts being the introduction of the heavy duty 9″ rear end housing. The most obvious exterior change was the introduction of gas tank doors replacing the previous exterior mounted caps, in line with the introduction of doors on the F-Series and Econoline vans. The rear marker lights were mounted vertically to give clearance for the doors. Some previously standard items, such as a passenger’s side seat and padded instrument panel, were made optional this year. Unique to the ’77s is a 14.4 plastic gas tank and an 8 gallon auxiliary tank. In its final year of production, 30,700 Broncos rolled off the assembly line before the large Bronco took over in 1978.

The early Bronco today enjoys a cult-like status among four wheel drive and collector car enthusiasts alike. Its simple, sturdy construction, V8 power, and excellent maneuverability ensure good off road performance and provide a platform on which many modifications can easily be made. The popularity of the classic 1966-1977 Ford Bronco will no doubt continue to soar in the years to come.

There were four trim packages for the Bronco. There was the base Bronco, Bronco Explorer, Bronco Sport, and Bronco Ranger.